I’ve noticed in the past that some of the warning labels on certain products are crazy.  I mean, why is it necessary to put “WARNING: Not for oral use.” on a tube of Preparation H???  Think about it guys!  Some moron must have done this and ended up with an extremely puckered mouth or something….and then tried to sue the company!  When idiots do these things the companies have to include these warnings so other dummies don’t do the same shit.  I just don’t understand it.  Preparation H is obviously for the other end!  So, who the hell would squeeze a tube of this stuff into their mouth and why?  And I’m pretty sure you can’t confuse a tube of that with a tube of Colgate or Crest!  So, I started searching for the stupid warnings that are now having to be issued due to stupidity leaks most people suffer from….Hope yaw enjoy!

1. fishing lure (with 3 steel hooks!)-Caution: harmful if swallowed.-  What retard decided to put a damn fish-hook in his/her mouth?  Now, I’ve heard of fish-hook accidents involving hooking a fellow fisherman…(my dad and my uncles! LOL)  But I ain’t never heard of someone just popping one into their mouth and attempting to swallow the damn thing.  And you can’t “accidentally” try to shove this thing down  your throat!  Damn!

2. massage chair- WARNING: Do not use chair without clothing and never force any body part into back rest area while rollers are moving!-  LOL  For starters, a massage chair is designed mainly for shoulder, neck and back massages.  Why in the hell would the client be naked in the chair?  Forcing a body part into the back rest area….hmmmmmm!  I am still trying to picture this one!  What are you trying to ram in there people?  And why does the warning have to include not doing this while the rollers are in use?  Haha…Holy crap!  On second thought, I don’t even want to picture that one!

3. Dremel electric rotary tool– Caution: This product is not intended for use as a dental drill.- WTF  Well, hell….I guess if you got severe tooth issues and you are drunk enough this might seem like a great idea at the time!  And don’t blame rednecks for this!  haha

4. baby stroller– Caution: Remove child before folding.– Now, this one caused me to kinda go into a mild form of shock.  Who in the hell folded their child up in a stroller???  What happened in this situation…woman exiting the store and in a fit of dumbness folds her baby up in the stroller and tosses it into the back of the van…only later to realize she didn’t have a child to put in or get out of a car seat?  Certain folks shouldn’t be allowed to reproduce!

5. sticker on a toilet at a public facility– Recycled flush water unsafe to drink.-  Now I know being thirsty sucks…but bathrooms usually have a damn sink!  Hell, some public places have a hose out back or a car wash…stick your face up to the spigot or run through the damn car wash rinse cycle!  Who in their right mind would drink from this???  LOL

7. iron– NEVER iron clothes while they are being worn.- LMAO  Now, I don’t do so good with an iron myself.  My husband will tell you that!  But ironing your clothes while you wear them is a new one to me…You can’t even blame alcohol for this one.  Drunk folks may lack a lil bit of intelligence while intoxicated but I don’t think they care about wrinkled clothes enough to try this one. HAHA   Even the mentally challenged know how a damn iron works!

8. shin guards– WARNING: shin pads cannot protect any body part they do not cover.–  Seriously???  I thought that when I put on shin guards they protect my head and elbows too!  Imagine that!  This unfortunate idiot had to have been a soccer player that head butted the ball too many times or something.  There had to be some serious brain leakage going on there!

9. birthday cake candles– DO NOT use soft wax as ear plugs or for any other function that involves insertion into a body cavity.  LOL  I’m really trying NOT to picture this!  I can only imagine why there was a need to put the last part of that warning!  Bottle rockets come to mind on this one!  Birthday candles….not just for making that birthday wish anymore!  haha

10. toilet plunger– Do Not use near power lines.-  What the hell?  I can’t even come up with a reason someone would have a plunger near a power line.  Are plungers even used outside the bathroom???  Well, nevermind……haha

11. Old Spice deodorant– Apply to underarms only -Well, where the hell else would you put it?  It ain’t cologne guys!  You shouldn’t be rubbin’ it on your neck, chest, or any other place on your body.  And here again, what bodily harm was caused by applying it to another body part? 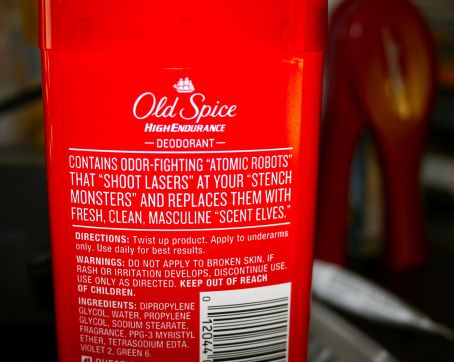 12. Komatsu flood light– this flood light is capable of illuminating large areas, even in the dark.  I know this isn’t a warning…but really?  “even in the dark”…LOL  The only reason statements like this are on products like that has got to do with dumb women.  I’m sorry ladies (mainly those blondes with no sense!) but some of ya’ll need special medication!  This kinda reminds me of those people who ask, “What’s the number?” when you tell them to call 911.

13. ear plugs– These earplugs are nontoxic, but may interfere with breathing if caught in the windpipe.  Damn!  This one made me think…”Surely I read that wrong!  Let me check that again.”  Life lesson #23…foreign objects will definitely interfere with your breathing dummy!  And earplugs go in your EARS not down your throat.

14. king size mattress– Do Not attempt to swallow- I am so glad they cleared this one up for us!  There would have been a tragic event had that label not been applied.

15. Fix-A-Flat– WARNING: DO NOT WELD CAN TO RIM.  Surely, this has got to be a joke!  And what’s worse is I was looking for a picture of someone being dumb enough to have done this….however, I found a picture and article of this woman.  WTF  This woman, living in Florida, went in for some procedure to make her butt bigger and the doctor that did the surgery put fix-a-flat in her ass and hips!  That’s right,  FIX-A-FLAT!  LMAO…I’m sorry but cosmetic surgery to fix a deformity or maybe to remove some excess skin after a tremendous weight loss would make sense to me.  But nowadays we got people changing their entire bodies for nothing!  Making your ass bigger?  Eat bread dummy!  LOL  And why would you want a big ol’ butt?  Hell, I been working hard to get mine a lil smaller…ain’t no way I’d want an ass that sticks out so much you could put a food tray on it! 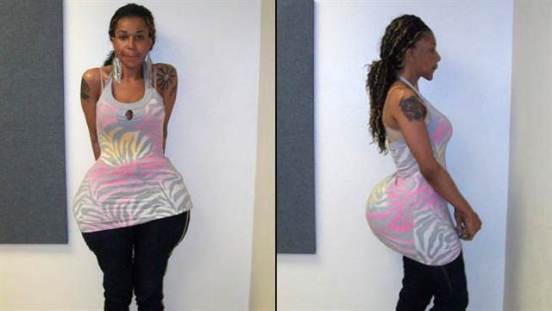