OK, before you jump to conclusions over the “envied” part, drop the disgusted look and pick your jaw up off the floor.  Let me explain my point of view on this.

Bonnie and Clyde went on their crime spree during the Great Depression.  The country’s attitude, at the time, was pretty much against the government.  This headlining couple wasn’t stealing huge amounts of money and they seemed to be having a blast being on the run.  Instead of looking like mass murderers, they were more like the “Robin Hood” of the nation.

They defied the law and lived dangerously.  They did commit some pretty heinous crimes, such as murder, and I’m not excusing those. But the fantasy of life on the road, running from the law, and living life on the edge captured the hearts of many.  This couple even had fun kidnapping cops!  Kidnapping the cops, riding them around for hours, and releasing them hundreds of miles down the road unharmed…tell me you’re not smiling!  I’m not saying doing that is right…but we are talking fantasy here!  Every young adult dreams of doing crazy stuff.  We have all been there, at one time or another.  Wanting to live life dangerously and doing the unexpected and Bonnie and Clyde did those things. 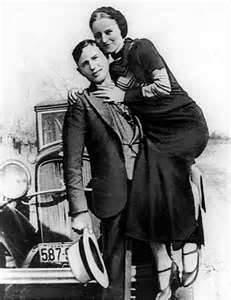 I think Clyde felt he didn’t have much of a choice.  Clyde’s family was pretty poor and usually didn’t have enough money to feed Clyde and his brothers and sisters.  Clyde resorted to stealing to help feed the family and pretty soon he graduated to stealing cars.  He basically grew up depending on his theft skills.  Learned behavior is not something easily changed.

Bonnie felt her life was way less than fascinating.  She was bored and tired of her marriage, especially with her husband behind bars.  Working as a waitress and then ending up with no job during the Great Depression caused major stress.  She was looking for fun, adventure, and a little rebellion.  Meeting Clyde gave her the possibility of breaking out and starting a new life.

Falling in love made their adventure even better though.  Imagine that feeling when you find love…the butterflies, the hunger, the excitement, the willingness to do anything to make your other half happy.  This dynamic duo took the world by surprise and never looked back.  I think we all, at some point in our lives, have wanted to defy the norm and do something outrageous.